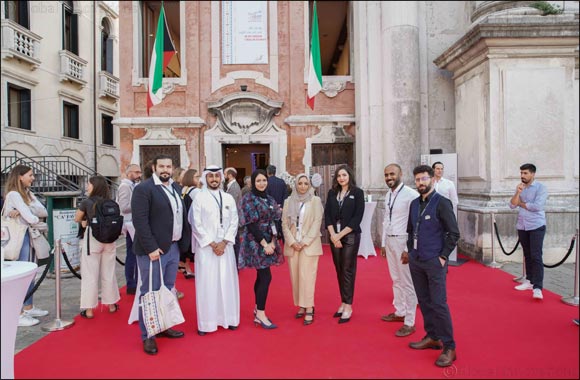 Sheikh Abdullah Al Salem Cultural Centre's Second Group of Resident Artists Make Waves at International Exhibition “In my Dream I was in Kuwait” .

Share Home >> Events & Exhibitions
• First Kuwaiti contemporary art exhibition to open in Venice by Kuwait’s largest museum complex
• Centre’s first international visual arts programme ignites a collaboration between Venetian craftsmen and artists from Kuwait
Kuwait City, Kuwait – 14 September 2019:  Following the first successful appearence in the ‘Heart of Culture’ exhibition in June, Sheikh Abdullah Al Salem Cultural Centre recently unveiled the new exhibits of three of its contemporary artists at Scoletta dell’Arte dei Tiraoro e Battioro, Venice, Italy on 10 September 2019. Developed through the Fine Arts Centre’s Artist-in-Residence programme, the exhibition titled,“In my Dream I was in Kuwait” signified the Centre’s aim to cement Kuwait’s position as an emerging competitor in the global art community.
The high-profile platform encourages the narration of one’s national and cultural identity by combining self-expression and the respective use of specific practices such as technique, material, and inclination. In addition, during the second phase, ‘Heart of Culture’ provides the Kuwaiti artists with the opportunity to attend a series of curated workshops with local Venetian master craftsmen and contemporary artists, specialised in various tools and mediums.
Reflecting on the new collection, Luca Berta & Francesca Giubilei ,Curator of the exhibition ‘In my dream I was in Kuwait’ said, “The second group of artists exhibiting their works in the exhibition ‘In My Dream I Was in Kuwait’ at the Scoletta dei Battioro e Tiraoro in Venice from September 10th to November 24th is composed of Khaled Anjadi, Naseer Behbehani and Ahmed Muqeem.
All three artists are united by an interest in the investigation of the human figure through individual and collective identity and will offer pictorial and photographic works that show the evolution and changes of their country seen from different angles.”
The Exhibition opening was attended by His Excellency Kuwait Consul General in Milan, Mr. Abdul Nasser Bukhadour, and the Mayor of Venice and the representative for tourism and travel, Ms. Paola Marr.
Inspired by a drawing by the artist Zahra Marwan, ‘In My Dream I Was in Kuwait’ presented the plurality of the artistic practices by Amani Althuwaini, Mahmoud Shaker and Zahra Marwan, whose works were displayed from June till August, while the artworks by Ahmed Muqeem, Khaled Al Najdi and Naseer Behbehani, were revealed in September and remain open until November 2019.
The Artist-in-Residence programme, continues to serve as common grounds for talented artists to advance their work and explore new creative realms. The programme’s mission includes fostering a local sense of creative community, creating dialogue and interest around the artist’s work, as well as building community engagement across domestic and international artistic platforms.
Sheikh Abdullah Al Salem Cultural Centre is one the many projects developed by the Amiri Diwan to facilitate the exchange of knowledge and promote critical, creative, and interpretive thinking within Kuwaiti society through world-class exhibitions and educational public programmes.

Next in Events & Exhibitions