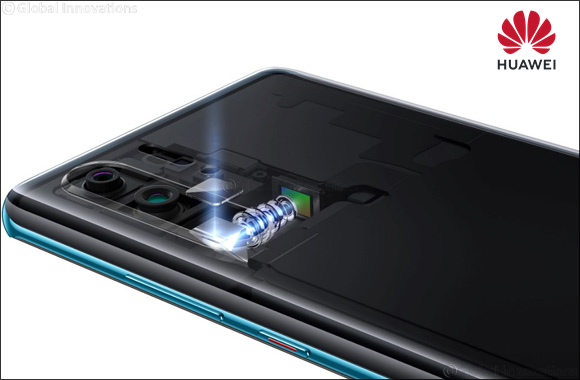 Share Home >> Technology
Kuwait – April 22 2019—  Huawei’s recently unveiled its latest flagship smartphone, the HUAWEI P30 Pro. Dubbed the Supercamera Phone, it is packed full with the company’s latest and greatest innovations. Here’s what’s new on the super powered flagship.
1. Optimized Snapchat Experience
Huawei announced that it has worked to optimize the Huawei P30 series camera for Snapchat, bringing more camera innovations to users, aiming for Snapchatters to soon be able to enjoy more experiences using the Huawei P30 camera.
2. Leica Quad Camera Setup
The HUAWEI P30 Pro packs a revolutionary Leica Quad Camera setup. This includes a 40MP main camera with the HUAWEI SuperSpectrum Sensor which brings in more light so taking pictures or shooting videos in the dark is not a challenge, a 20MP Ultra-Wide angle lens for both horizontal and vertical shooting, an 8MP telephoto SuperZoom lens and a 32MP front camera for shooting selfies with unparalleled quality.
The camera setup also includes the HUAWEI Time of Flight (ToF) camera that is designed to measure depth of field for beautiful portrait shots with blurred backgrounds and sharp foregrounds.
3. SuperZoom
Huawei’s engineering marvels have come up with a way to embed a massive zoom lens into the ever-so thin body of the HUAWEI P30 Pro. This SuperZoom lens lets users enjoy a 5x optical zoom, 10x hybrid zoom and an unprecedented 50x digital zoom that can bring even the farthest objects up close.
4. Dual-View Video
Sometimes a single recording is just not enough and you might even miss some details. With the HUAWEI P30 Pro, this is not a problem anymore, thanks to HUAWEI Dual-View Video1 technology, which splits the screen in two and allows users to record a wide-angle shot and a close-up shot at the same time. While this allows for better viewing angles while recording, it also gives users a more creative way of recording videos. For example, this feature can come in use when watching a football game, where users can have a wide-angle recording of the match, with a close-up of their favorite player.
[1] Feature will be enabled via HOTA update at a later date.
5. Definitive Performance thanks to powerful hardware
Powering the HUAWEI P30 Pro is the Kirin 980 chipset, Huawei’s most powerful smartphone chipset yet. One of the world’s first commercial 7nm chipsets, the Kirin 980 packs 6.9 billion transistors, cutting-edge process technology, a revolutionary architecture and a Dual-NPU, all which contribute together to a more efficient performance. The Kirin 980 7nm process technology compared with the 10nm process, improves performance by 20%, power efficiency by 40%.
The Kirin 980 can quickly adapt to AI scenes such as face recognition, object recognition, object detection, image segmentation and intelligent translation. So whether it's dancing to a fast song or quickly running in front of the camera, the Kirin 980 can focus on the joints and lines of the human body in real time.
The HUAWEI P30 Pro also houses a new and improved In-Screen Fingerprint sensor. Fingerprint recognition is improved by taking advantage of the ultra-wide 3p lens and a large aperture, which works in tandem to the pixel photosensitivity enhancing the Microlens. The new sensor also supports auto ring-tuning focus, further improving the autofocus accuracy by 35 percent ensuring every senor on the device lands the most precise focus. Unlock speed is also improved by 30 percent thanks to the industry-leading multithreaded dual-matching algorithm, which also uses a fluid unlock animation and hover sensing to improve user experience.
Keeping in mind users who require their phone at any point of the day, Huawei has worked towards developing the battery on the HUAWEI P30 Pro for extended use. The 4,200 mAh battery can give users up to an entire day of intensive use and is complemented by the 40W Huawei SuperCharge which will give users approximately 70 percent in just 30 minutes. The phone also supports 15W Wireless Charging, and a unique Wireless Reverse Charge feature, allowing users to place their friend’s phones or other devices including earphones and wearables on the HUAWEI P30 Pro to instantly start charging it, provided it supports the Qi wireless charging standard.
6. Night Shot
Night photography on smartphones has always been a challenge due to hardware and software limitations, often resulting in blurry or shaky shots. This will no longer be a challenge on the HUAWEI P30 Pro thanks to the Night Mode, which stabilizes pictures with the help of AI Image Stabilization and Optical Image Stabilization. The HUAWEI P30 Pro also takes advantage of the SuperSpectrum sensor which brings in more light and supports ISO levels up to 409,600. This makes it easier to take pictures and shoot videos even in dark conditions without having to compromise on details and clarity.