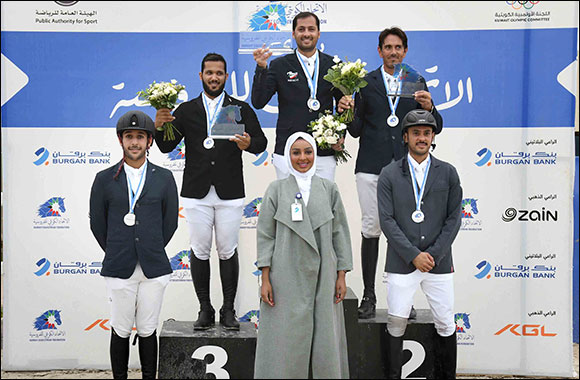 Kuwait, November 15th, 2022:  Burgan Bank has sponsored the second competition of the Kuwait Equestrian Federation (KEF) Tour for the 2022-2023 showjumping season, which was held at the Kuwait Riding Center (KRC) venue. The sponsorship falls under the umbrella of the Bank’s comprehensive social responsibility program which focuses on promoting and reinforcing the sports culture in Kuwait.
On the first day of the league’s second competition, equestrian Abdulrahman Alfuzae was able to take first place, followed by the equestrians Ali AlKhorafi and Latifa Alhajeri in second and third places, respectively. On the second day, equestrian Ali AlKhorafi won first place, followed by Antonio Murruzzu in second and Abdulrahman Alfuzae in third.

Speaking about the Bank’s sponsorship of the tour, Ms. Kholoud Rida AlFeeli, Group Head - Marketing & Communications at Burgan Bank, said: 'First of all, I would like to congratulate all the winners of this competition who all continue to be exemplary role models for our younger generations. As a Bank, we are always keen on fostering the wealth of athletic talent we have in Kuwait, especially in the field of equestrianism, considering it is one our most beloved heritage sports.”
She added: “Sports has long been a cornerstone of our community commitment and social responsibility efforts. Which is why we continue to offer our support to aspiring athletes, sports organizations and official national bodies to help elevate the status of sports in Kuwait.

It is worth noting that Burgan Bank’s sponsorship of the KEF tour began in 2021. The ongoing sponsorship and strategic partnership come as part of the Bank’s expansive social responsibility program, a big portion of which focuses on promoting and reinforcing the sports culture in Kuwait.

Russian Compani will Participate in the 11th Largest International Construction ...

Embrace this New Year with Catrice

Hands-on with the New HUAWEI MatePad SE - It's a Solid Entertainment Tablet for ...

As Unique as your LOVE

KIB Organizes The Stadium: the First-of-its-kind Community Tournament in Kuwait

Dhaman Signs MOU with (ECG) to Promote Trade and Investment Relations Between Ku ...