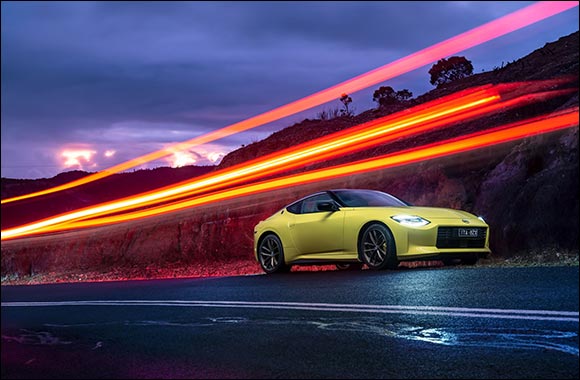 Share Home >> Automobile
A trip down memory lane to honor a legacy of performance and driving excitement
Kuwait: (10 November, 2022) – Following the global rollout of the all-new Nissan Z, and in preparation of its eagerly anticipated arrival to the Middle East later this year, Abdul Mohsen AbdulAziz Al-Babtain Company, the sole authorized dealer for Nissan vehicles in the State of Kuwait, takes pride in shedding light on the iconic model’s rich and exciting lineage that spans across seven generations and over half a century. Since its introduction to the brand’s line-up in 1969, Nissan Z has proven itself as a strong contender on and off the racetrack, selling over 1.8M units to date and earning the admiration of enthusiasts across the globe.
Built for enthusiasts by enthusiasts, the Nissan Z continues to witness a growing fanbase across the Middle East. Pushing the boundaries of innovation and engineering for over 50 years, the Z’s iconic status is celebrated in car clubs locally and regionally, with the Middle East, and Kuwait specifically, serving as the ground for the Z’s Guinness World Record title for the longest twin-vehicle drift in 2014.
The Nissan Z’s exhilarating heritage, which spans over five decades and seven generations, serves as a clear reminder of the icon’s thrilling driving experiences:
1) First Generation: The birth of an icon
Launched in 1969, the Nissan Fairlady Z (240Z) as it was known at that time, marked the first-generation of Nissan Z cars that would go on to rewrite the history of sports cars. A culmination of three years of research and design, the Nissan 240Z successfully went on to become a modern-styled, two-seater, six-cylinder coupe that delivered on its promise of thrill, selling over 520,000 units globally, and setting the record for sports car sales. As a testament to its performance, the first-generation Z also participated in and emerged the overall winner of the 19th East-African Safari Rally in 1971.
2) Second Generation: The first Nissan Z with a T-top roof
The second-generation Nissan Z (280ZX), which was launched in 1978, boasted a refreshed interior and exterior with a higher level of luxury to meet the growing demands of sports car customers. The 280ZX offered four-wheel disc brakes, a 2+2 model, a Turbo model, and the first offering of T-tops on a Nissan Z.
3) Third Generation: Winner of the All-Japan Rally Championship
A few years later, in 1983, the Fairlady Z evolved into the third generation (300ZX), bringing standard air conditioning and leather upholstery, while retaining the accessible entry point of its predecessors that enthusiasts loved. An outright sales success for Nissan, the 300ZX came equipped with a newly designed V6 turbo engine and secured its position on Nissan’s wall of fame by winning the All-Japan Rally Championship in 1985.
4) Fourth Generation: The first Nissan Z with a twin-turbocharged engine
Released in 1989, the fourth-generation model differentiated itself from its predecessors with a bold and unique design that lent the model a wider stance. A distinctive front end with headlights slanted at over 60 degrees, a lively silhouette, and short overhangs accentuated the model’s maneuverability and performance, while also being the first Nissan Z to be offered with a twin-turbocharged engine.
5) Fifth Generation: The Nissan Z that reignited excitement from enthusiasts
Bringing joy to enthusiasts across the globe by ending a six-year production hiatus in 2002, the Nissan 350Z paid homage to its predecessors with numerous styling elements borrowed from the iconic 240Z and helped Nissan rejuvenate its market presence. Tuned to perfection, the all-aluminum V6 in the 350Z, with twin-cam heads, variable valve timing, and a stout compression ratio, produced nearly double the power of the original Z sports car.
6) Sixth Generation: A Guinness World Record holder
Introduced in 2009, as a Coupe and Roadster, the Nissan 370Z delivered an exhilarating 332 horsepower from its 3.7-liter aluminum alloy V6 engine and was complemented by a sleek and aerodynamic design. For the true enthusiasts, a NISMO version was later introduced, that intensified the model’s head turning design and ramped the power up to a whopping 350 horsepower!
7) Seventh Generation: The All-New Nissan Z
Featuring iconic design details from past models, the all-new Nissan Z celebrates the sports car’s rich 50-year heritage. The all-new model is the most powerful Nissan Z to date, and the first to enrich driving experiences with the induction of launch control to the model’s line-up.
Since 1969, the Nissan Z has stood for everything Nissan believes about sports cars. Despite changing times and advancements in technology, the brand’s passion to deliver a thrilling driving experience remains intact and will be showcased at the regional unveiling of the all-new seventh-generation model later this year.

Russian Compani will Participate in the 11th Largest International Construction ...

Embrace this New Year with Catrice

Hands-on with the New HUAWEI MatePad SE - It's a Solid Entertainment Tablet for ...

As Unique as your LOVE

KIB Organizes The Stadium: the First-of-its-kind Community Tournament in Kuwait

Dhaman Signs MOU with (ECG) to Promote Trade and Investment Relations Between Ku ...