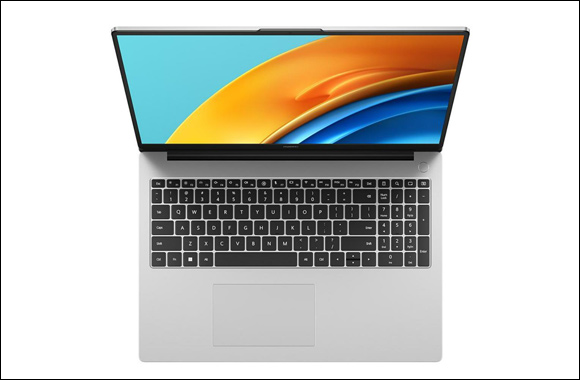 Huawei Expands its Portfolio with the Launch of its First 16-inch Laptops in Kuwait: HUAWEI MateBook D 16

Kuwait – Huawei Consumer Business Group (BG) announced today the launch of its first 16-inch laptop in Kuwait: HUAWEI MateBook D 16 – a High Performance Laptop as a move to expand its product portfolio and offerings to a broader audience. Led by extensive consumer research, Huawei has found that the desire for 16-inch lightweight laptops is on the rise. With a global move towards remote working and studying, there is an increased demand for large-screen and high-performance laptops.

The HUAWEI MateBook D 16 from Huawei’s official website and across select retailers Kuwait, starting KWD 249.9 along with FREE GIFTS worth KWD 39.9. upon purchase.

16-inch FullView Display + Sleek metallic body
The HUAWEI MateBook D 16 features an immersive 16-inch FullView display with a screen-to-body ratio of 90% and a novel 16:10 aspect ratio. Compared to a traditional 16:9 aspect ratio, the HUAWEI MateBook D 16 brings a wider view with its 16:10 aspect ratio, allowing users to be more productive when working with web pages, charts, data and written documents, as well as an excellent entertainment experience. The HUAWEI MateBook D 16 ensures the protection of consumers’ eyesight thanks to the TÜV Rheinland Low Blue Light (Hardware Solution) certification. In addition, the display also adopts DC dimming to help users alleviate eye fatigue. The laptop also supports 100% sRGB colour gamut, the display is capable of displaying richer details and more vivid colours for greater visual enjoyment, bringing a more immersive viewing experience to users. What is more? Users can be productive on the move with the HUAWEI MateBook D 16’s high portability thanks to its light metallic body of weighing similar as a 15.6-inch laptop at just 1.7kg.

12th Gen Intel Core H series Processor
The HUAWEI MateBook D 16 is powered by the 12th Gen Intel® Core™ H- Series Processor that runs on up to -i7-12700H, a TDP of up to 40W, dual channel RAM and a high-speed solid-state drive, which handles multi-tasking and complex usage scenarios flawlessly and efficiently, such as data analysis, code compilation, opening multiple webpages, charts, or PowerPoints.

Metaline Antenna
The HUAWEI Metaline Antenna is a brand-new antenna structure that, compared with average antennas, has 56% better signal conversion efficiency. In the same network environment, it offers 2dB and 2.6dB better upload and download signals, respectively. Even under weak Wi-Fi signals, the downloading speed is increased by 55%, while the lag in gaming and video conference are decreased by 57% and 67%, respectively.

Super Device Features
HUAWEI MateBook D 16 takes multi-device collaboration to a whole new level, thanks to Super Device, bringing super productivity with a cohesive multi-device experience. It lets you effortlessly connect to other Huawei devices nearby and collaborate between them all. Simply place your Huawei earphones, mice, keyboards, speakers and printers close to the HUAWEI MateBook D 16, and the laptop will automatically discover them and provide a prompt for quick and easy pairing.

In addition, with smartphones like the newly launched HUAWEI Mate Xs 2 and tablets like the 12.6-inch HUAWEI MatePad Pro, it is even more useful. Once you have wirelessly connected your phone, you will see its UI (User Interface) appear on your laptop screen, so you can operate it as if your smartphone and laptop are one device. You can access and edit your files, use and manage up to three phone app windows simultaneously, take video or audio calls from your phone through your MateBook, and even use your mouse and keyboard to control your smartphone.

Your tablet can be transformed into a drawing pad or second screen, with documents, images and more seamlessly shared between the two. Both laptops can also connect to a HUAWEI MateView monitor, so you can see your work on an even larger screen.
-End-