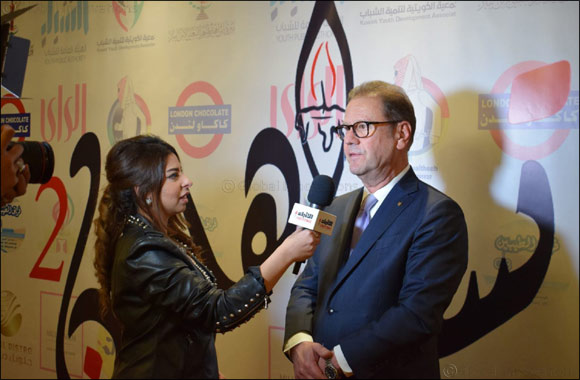 Under the auspices of the Public Authority of Youth & Sheikh Duaij Khalifa, Millennium Hotel and Convention Centre Kuwait sponsors the event

Kuwait City, Kuwait - Feb 26, 2020:   Millennium Hotel and Convention Centre, a five-star hotel situated at the heart of Kuwait City and one of the largest convention centres in Kuwait, hosts the second edition of Testahlon festival. Honouring 100 talents, the festival sheds light on those who have made significant accomplishments in various fields and ultimately contributed to prosperous Kuwait.

Under the auspices of the Public Authority of Youth and Sheikh Duaij Al Khalifa, the festival celebrates the Kuwaiti traditions and honours those with substantial achievements in their domains. This year, 100 stars, sports icons and celebrities were among the honourees in the gala ceremony of the second edition of Testahlon Festival. Hosted by Millennium Hotel and Convention Centre Kuwait, the ceremony started with the Kuwaiti anthem and was attended by Kuwaiti VIPs, officials and dignitaries with the wide presence and coverage of the key media. It also included an entertaining programme of four operas performed by the students of “Um Atiyeh Al Ansari School” where they performed beautiful dances inspired by the folklore of Kuwait and received applauds from all the attendees.
Likewise, Sheikh Duaij Al Khalifa has awarded Millennium Hotel and Convention Centre Kuwait who was represented by the general manager Ahmed Serafi for sponsoring and hosting the event highlighting the role of the private sector in supporting community initiatives.

Speaking to the media, Sheikh Duaij, said, “It’s an honour to be chosen as a sponsor for the second edition of Testahlon Festival which aims to honours all those who have contributed to the prosperity of Kuwait with their accomplishments. Awarding those who have served their country with their success and deserve to be awarded creates a great motivation for the next generation to achieve more success. This festival has come in the right time the festival was thoughtfully scheduled around the national celebrations showcasing the enthusiasm and cheerfulness of Kuwait.”

Ahmed Serafi, general manager of Millennium Hotel and Convention Centre Kuwait, said, “We are proud to sponsor Testahlon Festival in its second edition. It’s our duty as a leading hospitality provider and once of the largest convention centres in Kuwait to support community initiatives that drive growth and pay tribute to those who deserve it.”