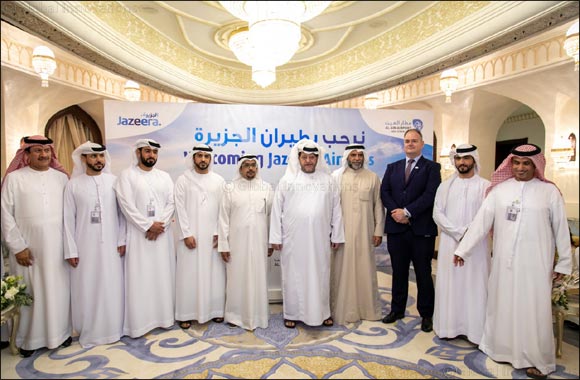 Share Home >> Travel & Tourism
December 19, 2019:   Jazeera Airways flight J9 139 landed at Al Ain International Airport in the UAE on Friday 13 December in the first-ever direct service between the airport and Kuwait. The service was made possible with the support of Abu Dhabi Airports and the Department of Culture and Tourism – Abu Dhabi (DCT - Abu Dhabi).
The Ambassador of the UAE to Kuwait, His Excellency Saqer Nasser Al Raisi, attended the inaugural flight, where he was welcomed by the Jazeera Airways’ Chairman, Marwan Boodai.
On arrival at Al Ain International Airport at approximately 1.45pm UAE time, the flight was welcomed by His Highness Sheikh Saeed Bin Tahnoun Bin Mohammed Al Nahyan; His Excellency Sheikh Sabah Nasser Al-Sabah, Acting Chargé d’Affaires at the Kuwait Embassy; Ahmed Juma Al Shamsi, Acting Chief Operations Officer of Abu Dhabi Airports; Rashed Al Shamsi, Director General of Al Ain International Airport; and Ali Hassan Al Shaiba, Acting Executive Director of Marketing and Communications at DCT Abu Dhabi.
His Highness Sheikh Saeed Bin Tahnoun Bin Mohammed Al Nahyan delivered a welcome speech during a reception after the arrival in which he conveyed the greetings of his father, His Highness Sheikh Tahnoun bin Mohammad Al Nahyan, the Abu Dhabi Ruler’s Representative in Al Ain.
“Jazeera Airways’ new flight to Al Ain is a milestone for our airline, which has been growing steadily and providing a reliable service to customers in the Middle East, Asia and Europe,” said Boodai. “We are very pleased to be serving customers from Kuwait and our network with flights to the unique region of Al Ain.
“On behalf of our airline, I take this opportunity to extend our utmost gratitude to His Highness Sheikh Saeed Bin Tahnoun Bin Mohammed Al Nahyan and His Excellency Sheikh Sabah Nasser Al-Sabah for honouring us with their presence today, as well as to Abu Dhabi Airports and the Department of Culture and Tourism – Abu Dhabi for enabling this new service and allowing us to connect passengers from our network to discover the wonders of Al Ain.”
Maarten De Groof, Abu Dhabi Airports Chief Commercial Officer, said: “We are delighted that Jazeera Airways has chosen to launch a new route from Kuwait to Al Ain as part of its rapid expansion plans in the region.
“The new route will unlock more choices for passengers travelling between Kuwait City and the growing airport of Al Ain. The GCC has always been one of our largest and most significant markets and Jazeera Airways’ new route will further expand Al Ain International Airport’s connectivity in the region that will truly benefit consumers.
“We look forward to building on our existing route portfolio across the Middle East and reinforcing Al Ain International Airport’s position as a major gateway to Abu Dhabi that facilitates sustainable economic growth for the Emirate.”
“The new flight route marks a significant milestone in tourism between Kuwait and Abu Dhabi, thanks to Jazeera Airways’ tremendous efforts,” said Ali Hassan Al Shaiba, Acting Executive Director of Tourism and Marketing at DCT - Abu Dhabi. “Our strong cultural ties and proximity make Kuwait a valuable tourism connection for Abu Dhabi. We are proud to witness the launch of this remarkable collaboration between DCT Abu Dhabi and Jazeera Airways, and we will be working closely with them to encourage travellers from Kuwait to discover the ‘heritage heartland’ of the emirate and experience its unique offerings.”
The direct flights between Kuwait and Al Ain opens a new route to explore the stunning views and rich heritage of Al Ain, making it an ideal destination for family retreats and cultural excursions. Visitors to Al Ain can enjoy nature hikes, sightseeing, some of the world’s oldest architectural wonders, and unique Emirati heritage experiences.
The service also provides flight connections between Al Ain and the airline’s network of 33 other destinations in the Middle East, Europe and Asia.
Kuwait-Al Ain Flights Schedule

Next in Travel & Tourism