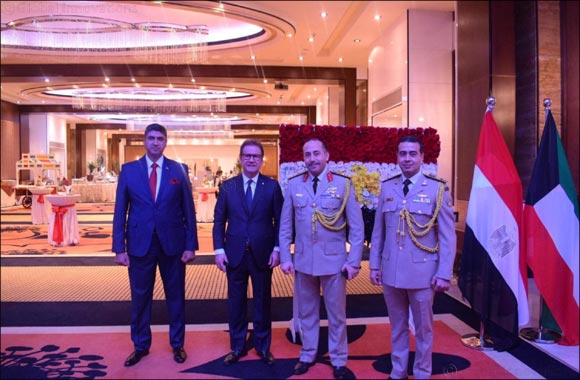 Honored by the attendance of diplomats, sheikhs, VIPs and Egyptian expats, the celebration reflects the outstanding hospitality standards at the hotel

Kuwait City, Kuwait - July 9, 2019:  Millennium Hotel and Convention Centre Kuwait, a five-star luxury hotel located at the heart of Kuwait city, hosted the grand celebration of the 67th anniversary of July 23rd revolution of Egypt. Under the sponsorship of the Egyptian embassy and the attendance of Kuwaiti officials and VIPs, this celebration reflects the strength of diplomatic and public relations between Kuwait and Egypt.

On Wednesday, July 3rd of this year, the Egyptian embassy in Kuwait organized a reception party to mark the 67th anniversary of July 23rd revolution of Egypt at Millennium Hotel and Convention Centre.  His Excellency the Egyptian ambassador to Kuwait, Mr. Tareq Al-Quni, commenced the celebration with a short welcoming speech to the guests. His Excellency Mr. Mohammad Nasir Al-Jabri, Minister of Information and Minister of State for Youth Affairs, along with many Kuwaiti sheikhs, Arabs and African dignitaries, diplomats and representatives of the Egyptian expats in Kuwait have attended the celebration, socialized and enjoyed several artistic and entertainment programs.

Egyptian artists had the chance to display their paintings and to perform entertainment programs including the artist “Hind” who has amused the attendees during the event with her performance on Oud. Egyptian traditional dances also were performed by Egyptian bands along a lavish buffet comprising Egyptian dishes and delicacies, while the most significant program was a true story told by Carol Adel, one of the hotel officials.

Ahmed Serafi, General Manager of Millennium Hotel & Convention Centre Kuwait, said, “We are honored by the presence of His Excellency the Egyptian Ambassador to Kuwait, Mr. Tarek Al Tareq Al-Quni, and His Excellency Mr. Mohammad Nasir Al-Jabri, Minister of Information and Minister of State for Youth Affairs, many Kuwaiti sheikhs, Arabs and African dignitaries, Diplomats and representatives of the Egyptian expats.

We would like to extend our deep thanks to the Egyptian Embassy for trusting and choosing our hotel to host this event. We have recently won the title of the leading conference hotel in Kuwait at the World Travel Awards, and we pledge to our loyal guests that will continue to be leading across all operations and facilities.”

Huawei and Kuwait College of Science and Technology (KCST) Sign Memorandum of Un ...

Burgan Bank: Highlighting the Board of Directors Commitment to Maintain Governan ...

Plan Your Romantic Getaway This Year at Millennium Hotel and Convention Centre K ...

Why User Experience is Essential for Travel Business Growth?

Find Your Lavish Feast and Theme Night in Kuwait

Burgan Bank Rewards Top-Performing Employees and Branches for Quarter 4/2019 and ...