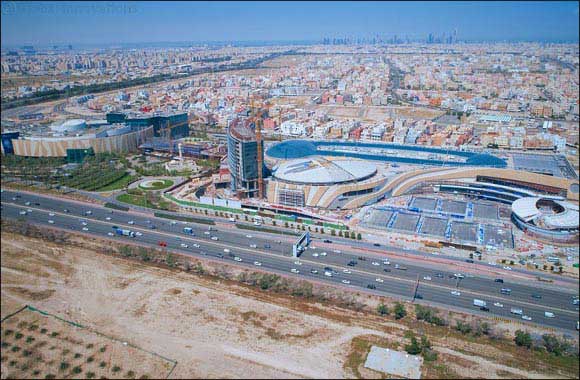 Supported by the Kuwait Public Authority for Sport (PAS) and co-ordinated by its Director General Hamoud Fulaiteh, the VIPs were briefed on the facility, the largest public-private partnership in Kuwait, by Sheikh Ahmad Al-Jaber Al-Sabah, President of the Kuwait Tennis Federation (KTF) and Mr. Mohammed Jassim Al Marzouq, Chairman, Tamdeen Group, Kuwait’s leading mixed-use property developer, which is financing, developing and building the complex in partnership with PAS.

After the briefing, the VIPs praised the advanced design of the complex and its outstanding facilities which are expected to boost the profile of tennis and encourage Kuwaiti youths to take up the sport.

Dr. Al-Obeidi said he believed the complex would help take tennis to new horizons, for Kuwait, Arab countries, and the rest of the world. “We take pride in such prestigious Kuwaiti projects that introduce new concepts matching the standards of international mega-projects,” he commented. “I wish the project total success; as it will add another milestone to Kuwait's list of achievements. We eagerly await the inauguration and hope to see more projects serving Kuwaiti youth.”

Thanking the delegation, Mohammed Jassim Al Marzouq, Chairman, Tamdeen Group, reiterated the Group’s commitment to making the complex a resounding success. He said: “Thanks to the cooperation of the Public Authority for Sport and the Kuwait Tennis Federation, we were able to take on a project of this scale, which mirrors the group’s ability to realize leadership and prosperity in developing projects that serve the country. We promise that the Sheikh Jaber Al Abdullah Al Jaber Al Sabah International Tennis Complex will foster Kuwait’s position on the regional and global tennis scene.”

The 263,430 sq.m complex is one of  the most expensive sports facility in Kuwait. It will host the KTF’s headquarters and 18 tennis courts furnished with the latest ‘ProCushion’ acrylic surfaces, state-of-the-art soundproofing technology as well as fixed and versatile seating tailored by award-winning starchitect Sir Norman Foster and manufactured by Figueras International.

The complex will seat 5,000 in a covered multi-purpose arena, a 1,500-seat open court, eight covered courts, eight open-air courts, a 5-star hotel and a selection of retail and dining venues. Around 11 million visitors a year are expected at the complex which will be directly connected to 360 Mall, Kuwait’s favourite shopping destination.