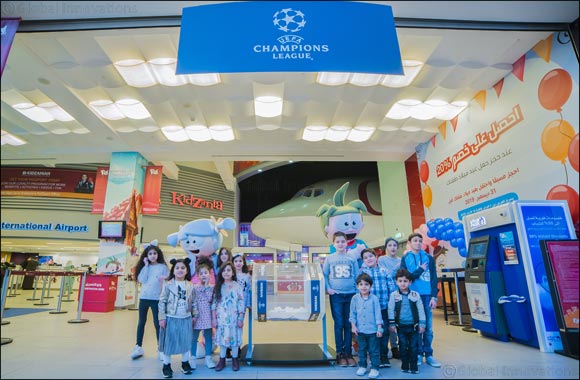 To Send Winners to The UEFA Champions League Final in Madrid

Lead automotive sponsor of the UEFA Champions League encourages youth empowerment through sports and with it, provides the ultimate chance to watch the 2019 Finale!

Kuwait, 19 February 2019: Driven by its goal to play a positive role in the community while offering access to enjoy the most valuable experiences, Abdulmohsen Abdulaziz AlBabtain Company’s (AABC), the sole authorized dealer of Nissan vehicles in the State of Kuwait, recently partnered with KidZania Kuwait to highlight the 2019 UEFA Champions League Final.

Ending on 1st March 2019, children at KidZania Kuwait can participate in a series of contests ranging from video games, Foosball and Football scoring competitions, involving different rounds of games which will entitle the winners to enter a draw on March 7th, 2019 at 7PM, for a chance to attend the UEFA Champions League Final in Madrid 2019.

As Europe’s top football club competition, the UEFA Champions League is viewed as the most popular sports event in the world including the Middle East. This long-lasting strategic partnership with both UEFA coincides with Nissan’s aim to accommodate the growth of Kuwait’s strong sports community and rise of soccer talents among the ambitious youth.

Abdulmohsen Abdulaziz Al Babtain Co. has been an avid supporter of the overall learning and development of children, evident through its many regional and local sponsorships and collaborations with KidZanian Kuwait. It is worth mentioning that through our previous joint ventures with them, children were able to experience Nissan’s all-encompassing automotive establishments and beneficial sound automotive, and traffic safety lessons.

Nissan Al Babtain welcomes all of the little UEFA championship and athletic fans to visit KidZania Kuwait during this limited time-offer and try their hand in winning the chance to watch the most anticipated football tournament, moreover, their favorite footballers up close and personal.