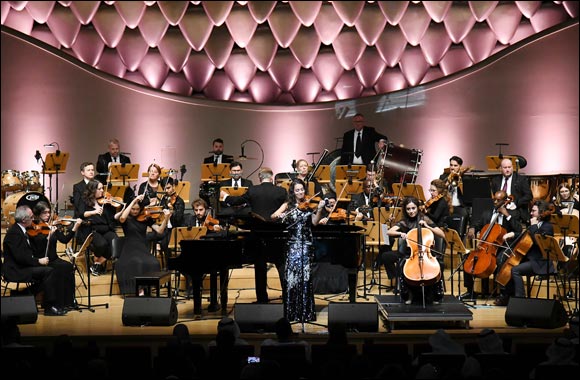 Under its continuous support of Al Ahmadi Music Group events

Commenting on the Bank’s continuous support for Al Ahmadi Music Group, Ms. Hessa Hussain Al-Najadah, Senior Manager – Corporate & CSR Communications at Burgan Bank, said “We are very proud of our strategic partnership with AMG. This sustained fruitful collaboration over the years has enabled us to contribute to the success of many prestigious cultural events. Our partnership with Al Ahmadi Music Group reaffirms our commitment to supporting creative endeavors in Kuwait and contributing to enriching the country’s arts and culture scene.”

She further noted “The Ayoub Sisters musical duo have performed internationally in some of the world’s most esteemed musical venues, such as the Royal Albert Hall in London and the Dubai Opera. Their latest album, Arabesque, has also ranked high among the most popular top albums on iTunes classical charts, and we are delighted to be a part of introducing this level of world-class artistic excellence to Kuwaiti audiences and in helping make Kuwait’s music scene even more vibrant.”

Richard Bushman, Director of Ahmadi Music Group, said, 'We are so proud and delighted to have Burgan Bank as our season sponsor.  For ten years, their support and energy have enabled us to stretch our ambitions and our achievements.  Burgan has a true vision for the power of culture and education in Kuwait, and Ahmadi Music Group is thrilled to be a part of it.  Many thanks to the bank and all of its people.'

As a leading Kuwaiti institution, Burgan Bank will continue to play an active role at all levels of social development, including art and culture and confirm this commitment through its comprehensive and multipurpose social responsibility program, which invests extensively in supporting the Bank’s partner organizations and institutions that dedicate their efforts to enhancing the arts and culture scene in Kuwait.