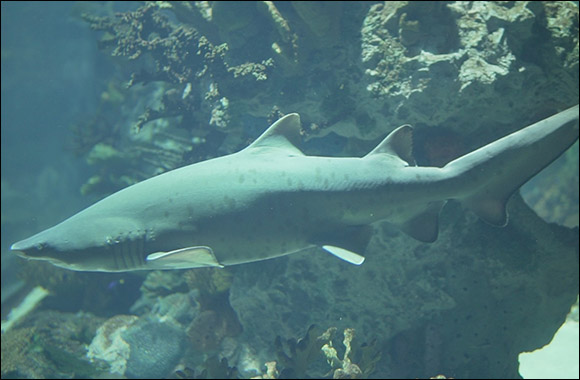 In a step towards global scientific institutes being able to preserve the Sand Tiger Shark species, cementing TSCK’s position as a major scientific and sustainability hub

Dr. Salem Al-Ablani, a biologist and a former member at the TSCK Board of Directors

Kuwait, 6 July 2022:  The Scientific Center (TSCK), one of the centers of Kuwait Foundation for the Advancement of Sciences (KFAS), announced a major global scientific achievement, with the successful breeding of the endangered Sand Tiger Shark and the successful care of the newborn sharks – under the umbrella of a carefully mapped out strategy to ensure their continued health and wellbeing. A first of its kind achievement for the center, this new milestone sets TSCK apart as one of a few centers globally to have successfully bred this endangered species. To celebrate the scientific feat, TSCK held a press conference on July 5, 2022 in the presence of a number of representatives of major institutions, entities, and key figures in the world of environmental sciences, preservation, biodiversity and sustainability. At the conference, the attended were able to see the baby sharks for themselves, who have now become part of the impressive group of Sand Tiger Sharks that the Center has cared for now for more than 20 years – becoming one of the most popular marine creatures at TSCK.
The famed Sand Tiger SharkBibi, who is estimated to be more than 20 years old herself, gave birth to the new baby Sand Tiger Sharks, one male and one female, on, January 23  2022 at TSCK Aquarium. The baby sharks were named Bader and Badriya, a choice made by the public via a vote held on TSCK’s Instagram account.

On his part, Dr. Salem Al-Ablani, a biologist and a former member of the TSCK Board of Directors, said that over the course of 22 years, the Scientific Center was able to provide and maintain a suitable environment for Sand Tiger Sharks that enabled them to reproduce naturally and continuously without any artificial interference during those years. According to scientific studies, this type of shark is one of the rarest species that breeds in aquariums, due to various stressors such as crowding, diet, and water temperature. The gestation period of females ranges from 12 to 14 months, and it is difficult to maintain her pregnancy for this length of time under all the factors inside an aquarium’s environment. The successful birth of two baby sharks is a clear indication of the good conditions that characterize TSCK’s aquarium's environment. The birth of healthy youngsters also indicates that the nutritional value of the sharks' diet is very high. Which is reflected very positively on the excellent breeding practices of the staff of the Marine and Wildlife Department and their expertise, not to mention the excellent management of the scientific center.

Al-Ablani further noted: “The biggest challenge for the Scientific Center was to safeguard the lives of the young sharks after their birth, as the fact is that Sand Tiger Sharks babies need extreme care to be able to survive. Therefore, we find it very difficult to reproduce this breed of sharks, and the survival of this type of sharks is considered rare, and very successful models are few and far in between.”

Once the birth took place safely, the Aquarium team, led by Global Consultant Andrew Clarke, rushed the youngsters out of the main tank in time, where they were transferred to the nursery ponds to ensure their safety – and where they were closely monitored for all aspects, especially their feeding. The team then performed a CT scan of the youngsters to ensure their health. The team also put in place a strategy to take care of the newborns and ensure their proper growth, by providing the right amount of food they need at the right time.

About Bader and Badriya’s condition, Al-Ablani said: “The baby sharks are in excellent health. Each one of them weighed about 3.5 kg at birth and began to feed about five days after birth, which is the norm for this type of shark given that they are born with egg yolks and the remains of the fetuses they ate during the gestation period in their stomachs. At the age of four months, the youngsters weighed about 9.5 kg and reached a length of about 130 cm. Currently the Center's specialized staff carefully weighs the amount of food they are fed, to be able to track how much each of them consumes, and we use this information to determine their growth rates. We also collect morphometric measurements (weight and height) monthly.”

Al-Ablani continued: “These sharks have great ecological importance and value in maintaining the marine bio-balance, as well as scientific value in terms of what they mean for the field of scientific research. With this information, we will learn more about Sand Tiger Sharks, and will help other facilities around the world that struggle to breed and nurture them. We can also use this information to better understand their natural history, and help provide vital information about some of the environmental threats to which these animal populations are exposed to in nature - such as poaching, bycatch, and other threats, which are thankfully in decline. Our daily observations also give us insight into their natural and reactive behaviors.”

On her part, Rana Al-Nibari, TSCK’s General Manager, said: “We are proud of this impressive achievement, which confirms our full commitment to the environment and our eagerness to do everything possible to achieve our mission and vision of contributing to the preservation and sustainability of the environment. This is not simply through awareness efforts, but by playing an active and effective role in driving action and fostering a culture of preservation. Our success in breeding sand tiger sharks is attributable to our high-quality facilities, the experience of our specialized staff and our world class consultants.”
The Scientific Center continues to contribute scientific information that is set to help other aquarium centers around the world to preserve the survival of Sand Tiger Sharks, which are one of the species listed on the International Union for Conservation of Nature's (IUCN) Red List of Threatened Species. Al-Nibari further added: 'We are pleased to share our experience with all aquarium centers in the world to help contribute to saving these sharks from extinction and ensure their populations sustainability. We also hope to continue to produce later generations of them in the Scientific Center's Aquarium.”

It is worth mentioning that, since opening its doors in 2000, the Scientific Center has been relentless in its efforts towards environmental and wildlife preservation. The Center has continued to develop its facilities over the course of the past 22 years, ensuring they are maintained in accordance to the highest possible international standards, which has led TSCK to obtain accreditation by the European Association of Zoos and Aquariums (EAZA). To date, the center remains among a select handful that have obtained this accreditation in the Arab world, due to the high standards required by the association to obtain this particular honor. This is especially important as this accreditation allows international centers to benefit from and exchange the necessary experiences that would contribute to preserving the environment and sustaining the lives of animals.

At the conclusion of the conference, Al Nibari thanked all the attendees and invited shark lovers and those interested in conservation issues to come to the Mijbil Al Mutawa Aquarium to watch the newborns, Bader and Badriya. during its annual Shark Week event, which takes place this year during the Eid Al Adha holiday.

Here is Why HUAWEI FreeBuds Pro 2 has the Edge

It's Your Story, Wear it your Way

HUAWEI MateBook X Pro Depicted and Reviewed: It is Hand Down the Ultimate Elegan ...

An Icon in Solid Gold

Burgan Bank Continues its Support for the ‘Let's Be Aware' Financial Literacy Ca ...

Wizz Air Abu Dhabi to Expand Its Ever-Growing Network with the Launch of Flights ...