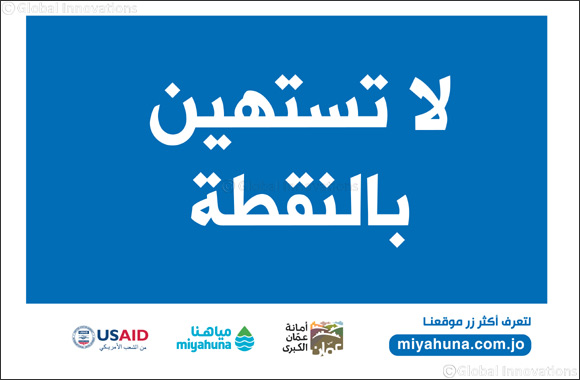 Kuwait – August 21, 2019:   Millions of Jordanian citizens, and thousands of Jordanian organizations stood in support of the nation’s water scarcity issue following the launch of a unique linguistic campaign from Miyahuna. In collaboration with Memac Ogilvy, Jordan’s water utility organization removed the dots or drop-like elements from the Arabic spelling of logos, altering their meanings, and therefore highlighting the importance of a few single drops.

The campaign, named Don’t Underestimate the Drop, racked up almost 50 million impressions during the teaser phase alone, which went live on July 28, 2019.
As the most water scarce country in the world, Jordan has been suffering from a lack of water security due to limited water resources, irregular rainfall patterns, and climate change, intensified by a growing population.

The per capita water consumption is approximately 100 cubic meters per year, well below the global poverty line of 1,000 cubic meters per year. Despite this fact, Jordanians are consuming twice the amount of water available from renewable water sources, placing immense stress on the nation’s reserves.  This makes awareness of the importance of even the most miniscule water usage absolutely crucial for the Kingdom.

Endeavoring to raise such awareness through facts about the country’s water sources, Miyahuna’s teaser campaign cleverly manipulated the Arabic word for ‘drop’, playing on the fact that the word for ‘drop’ is the same as the dots used adjacent to some letters. By leaving out the dots, the phrase becomes challenging to read while cleverly illustrating the value of a ‘drop’. Stirring up suspense within the Jordanian community, several tier-one print and online publications dropped the ‘dots’ from their logos while organizations, companies and citizens re-crafted their Arabic logos and names without ‘dots’.

The hashtag  #áÇ_ÊÓÊåíä_ÈÇáäÞØÉ became a nationwide trend generating 46 million impressions organically. The teaser phase of the campaign was followed by detailed information and facts, and practical ways people save water.

“The campaign was overwhelmingly successful in highlighting the significance of preserving water resources in Jordan, a country known to be one the most water-stressed countries in the world. We are aiming to create awareness and encourage citizens to conserve water through adopting simple behaviors. We are extremely delighted to see millions of Jordanians in addition to hundreds of organizations supporting the campaign. At Miyahuna, we hope that this campaign is a continuation to a promising phase of people standing together behind a national cause,” said Communications and Water Awareness Unit Head at Miyahuna Company Mr. Orwa Al Falayleh.

On his part, Mohammad Kamal, Managing Director and Creative Director at Memac Ogilvy - Jordan, expressed, “We are honored that the Jordanian water utility, Miyahuna, has placed their trust in us to tackle a vital issue resonating within our beloved country.” Kamal continued, “Social media and media in general have become an integral part of our everyday routine, while language is essential to every aspect of interaction and communication.

We therefore hoped that fusing this inspiration with the campaign’s ultimate aspiration would eventually stir up sentiment within the Jordanian community in a unique way.”

The campaign was launched in collaboration with the Ministry of Water and Irrigation, the Water Authority of Jordan, and Greater Amman Municipality, with the support of USAID through its Water Management Initiative Project.

Previous in Energy and Industry

Next in Energy and Industry

Panasonic Jaguar Racing Head to Berlin for a Lockdown Showdown

NAS and IGC Authorized for PCR Testing of Travelers from Kuwait

Make Up for Ever Introduce Two New High Performance Products Within the Aqua Res ...

Mouawad Reveals the Journey of the Extraordinary Botswana Diamond

Pandora Joins Forces with UNICEF to Raise Over $1M in Aid of New One Love Initia ...